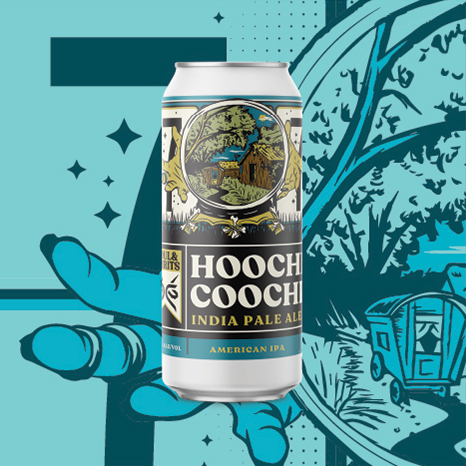 Our American India Pale Ale is everything you want in an IPA. At first, an alluring dank aroma, then you take your first sip. Our special hop blend gives this beer bewitchingly bold citrus and tropical characteristics reminiscent of your favorite soft, juicy square candy. It will leave your mouth watering for another drink. A wicked bitterness rounds out the finish of this bright and flavorful ale. Hoochie Coochie is the IPA you have been looking for, like gypsies drifting from one town to the next, this beer will make you want to jump and shout and tell the world all about it!

Muddy Waters grew up near Clarksdale, Mississippi emulating local blues greats: Son House and Robert Johnson; even though he would later be known as the modern father of Chicago blues, his style of playing was often referred to as reigning from the Delta blues. The song was written by Willie Dixon and first recorded by Waters; it makes references to several hoodoo folk magic elements and the term ‘hoochie choochie’ has been used in many different contexts such as: a provocative dance, a practitioner of hoodoo or an attractive person. A key feature of the song is the use of stop time, or pauses in the music, during the first half of the progression. This musical device is commonly heard in New Orleans jazz, when the instrumentation briefly stops, allowing for a short instrumental solo before resuming. However, Waters’ use of stop time serves to heighten the tension through repetition, followed by a vocal rather than an instrument fill. In 1984, the song was inducted into the Blues Foundation Hall of Fame and in 1988, it was honored a Grammy Hall of Fame Award; it is one of the Rock and Roll Hall of Fame’s 500 Songs That Shaped Rock and Roll; a selection in Rolling Stone’s 500 Greatest Songs of All Time; and in 2004, was selected for preservation in the National Recording Registry.